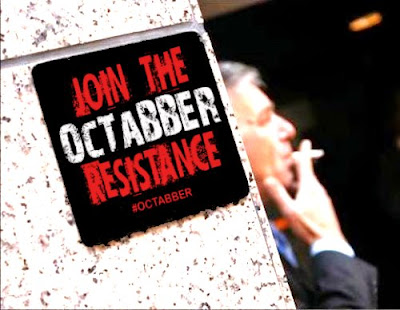 Here we are again. Now in it's third year, Stoptober, Nanny's do as we say October campaign is back again in a bid to force us all into the perfect size 10, non drinking, non smoking, tofu-eating, water-supping perfect human specimens to, presumably, ensure we can become 150 year old burdens on society. However, this year on Twitter, it seems to be targeting all sorts of undesirables from smokers, to drinkers to the overweight - and jumping on the bandwagon a month in advance is the long-running Movember and new Govember campaigns, for those who like to grow moustaches and goatee beards.

Nothing has changed for Tabbers and we are here again to say we love our tabs and we're not quitting despite the Govt repeating this campaign aimed at trying to force a change of behaviour via a community push in a sort of "You're either with us or against us" kind of way.

However, #Octabber is about much more than just a statement from informed adult consumers who want to be left alone in peace without harassment to enjoy a legal product of choice. We resent the waste of tax payers cash on such silly gimmicks which do not have the effect the professional healthists brag about. Thousands/millions (insert outrageous stat for effect) of smokers do not quit during the month and you only have to check out the #Stoptober hash tag to see that it's mostly health professionals, local authorities, alleged charities, and other tax funded, Big Pharma and corporate funded organisations that are getting excited about it. After all, their jobs depend on coming up with such propaganda and they are as dependant upon smokers for their living as the tobacco companies.

Despite the ever increasing hate campaign, marginalisation and stigmatisation of smokers, calls to ban them from outdoor public places, that they have every right to use, moves to remove yet more private property rights with car bans and home bans on the horizon, it seems we are still increasing in numbers with new figures that show one in five people still smoke.

The new paid for #Stoptober Twitter campaign was launched early and even after ploughing in cash that could be better used towards funding cancer drugs, for example, the subject still doesn't trend on the social networking site. More people were talking about the latest UKIP defection and former Tory MP Brooks Newmark's private parts than quitting or smoking. Most people couldn't care less about the issue but what is pitted against consumers each year with this campaign is the power of the state and corporate funded bodies flexing their muscles against the little people.

Perhaps the bottom line is that people don't like to be bullied and they will kick back. Smoking is now, more than ever, the torch of freedom and more of a contentious and divisive issue than its ever been between those that smoke and those who hate smokers. Non smokers, are generally tolerant people who would back inclusive moves to give tobacco consumers their own pubs and clubs. They believe that in truly fair, tolerant and inclusive societies, everybody's needs, wants, desires, and aspirations should be taken into account.

Until the Govt begins to listen to us, #Octabber will be back year on year.

We had hoped to launch the same sort of campaign as we did last year with Tabbers' Tales but we don't enjoy the same kind of resources as the anti-smoker industry. We could get one smoker per day for a year to tell their stories of why they're fed up at this unprecedented attack on their chosen and long lived lifestyle but sadly, we won't get the same time to blog this year so we'll leave over to you to say what you want in the comments. Moderation is on because paid anti-smoker astroturf trolls get sent in to be disruptive and this is not a place for them or the awful abuse that usually comes with them.

When we launched this campaign we stated that the anti-smoker propaganda that claims most smokers want to quit is untrue. Most of us love smoking and enjoy tobacco. We've never yet met a smoker who smoked because they wanted to quit. We support progressive moves in the industry to make the product less risky, either by the expansion, acceptance and encouragement of ecigs as a safer alternative to smoking (as long it isn't an enforcement on those of us who will always love the traditional culture of enjoyment of tobacco), and investment in the new generation of cigarettes which the Govt, if it really wanted to reduce harm caused by smoking, would eagerly embrace and promote. It should not now, or ever, support smokerphobia in the same way that it doesn't support any other kind of hate group like homophobics, xenophobics or Islamophobics

We are and remain totally against any bullying, coercion, community campaign, ban, junk science "study", or untrue propaganda , such as smokers cost everyone else more money. - we don't - which is aimed at making us quit through forced marginalisaton.

Enjoy #Octabber this year as last and the year before that. Have your say, and tell the Govt what you think. If you tweet, you could promote the #Octabber hashtag or be sure to also tell those parties currently losing political support hand over fist because of laws and regulations that treat adult consumers as children that #WeSmokeVapeWeVote

We're off to enjoy a nice home grown tab and a cup of tea with a homemade piece of cake. It doesn't get more organic than that. Meanwhile, there are plenty of blogs for smokers/vapers and tobacco lovers to enjoy throughout this month and we list some of them here.

There are a lot more free-choice and anti-Nanny State bloggers with a passion for both smokers' and vapers' rights out there and all of the blogs linked above carry links to them. Blogging and dropping in for a chat while having a drink and smoke has, for many of us, become the new, if virtual, pub. So few of us have been at a real bar since the spiteful, exclusive, and politically motivated blanket smoking ban hit us on July 1, 2007.


Posted by Beleaguered Consumer at 09:37