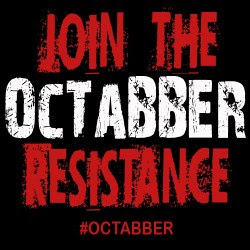 To prove that Stoptober isn't the only gimmick to come up with a silly name, we thought we'd have a go ourselves and before we knew it, #Octabber was born. Up north we call our cigs tabs - hence Oct-tab-ber. The # precedes it for those willing to promote and share it on Twitter with a view to getting people talking about it and aware of it.

We are not awash with tax payer cash so we don't have the luxury of TV advertising campaigns, social media promotions, web or newspaper advertising that is afforded to Stoptober. We get no funding from anyone and that includes the Tobacco Industry. We are simply independent grass roots consumers fed up to the back teeth of anti-smokerism since war was declared on us in 2007.

#Octabber says that we love our tabs and we have absolutely no intention of quitting, not now, not ever, no matter how much pressure is applied by those paid to coerce us into abandonment of a legitimate adult product which for some is a lifetime culture.

We are the highest UK tax paying consumers. We have already paid our healthcare dues, and more, but we get absolutely nothing back in return except what feels like harassment via continual public campaigns. Figures continue to show that we pay more into the system than is spent on alleged "smoking related" illnesses.

National Nagging used to be just one day of the year and now we get a whole month with added corporate bullying from big names like Nike and Boots jumping aboard The Thug Bandwagon.

We don't want our taxes to fund this kind of propaganda - or to boost the fortunes of private business. We want the £13.1 million pounds of our money currently poured in to fund anti-smoker campaigns, to be used instead to improve the health service via direct patient care. Channel 4 News recently reported that we are five times more likely to die in a British hospital because of underfunding. Now we see where the money goes astray.

The Stoptober message is also socially divisive. It appears to say "if you're not one of us then expect to be excluded and ostracised." One of our followers watching the ad said : "knowing you won't quit as they turn their backs to the camera, smirking, feels like being pushed into a corner by a bunch of playground bullies who then walk away after nicking your pocket money."

Government is being misled by anti-smoker industry claims that almost all smokers want to quit. We don't. Many of us would like our hobby to be more affordable and less risky but this issue is no longer about health. It is about political ideology, smokerphobia, and cold hard business profit.

If it was really about saving lives then government and private business should support progressive research, as opposed to junk science and gimmicks. That is the way forward. This is the technologically advanced 21st Century after all and not the middle of the Dark Ages where sinners are punished until they repent. A safer product is possible and consumers want it.

Current tobacco industry research is an excellent first step in this evolution. The enforced anti-smoker "Quit or Die" approach is putting the lives of future generations at unnecessary risk and we resent it. Over regulation of the product can only drive poor consumers underground to the dangerous, contaminated, and criminally run black market.

Anyone who argues that tolerance, research and education are more effective in reducing the health risk associated with tobacco smoke, and disagree that prohibition is the only way forward for tobacco consumers, is smeared dismissed and attacked by a "cause" which has long since lost its way.

We hope that #Octabber explains what we are all about and displays at least some of the anger we feel. You don't have to choose Stoptober. It isn't compulsory no matter how it feels. You can find friends and a safe haven here. Next time an unwelcome approach nags you to quit your tabs then be sure to tell them that you won't be joining Stoptober because you support #Octabber.

Good luck to anyone who does choose to quit smoking during October, or any other month of the year. Quit or smoke, it's your choice. Expertise, experience and evidence tells us that Nicotine Replacement Therapy - ie - patches, gums, and other chemical alternatives to smoking don't work. Abstinence is more effective. For those who love smoking but don't like the smoke then there are also e-cigs - the most effective quitting method ever and a much cheaper alternative to tobacco - if not quite as nice.

Feel free to post comments of support or your own Stoptober/#Octabber experiences but be warned that this is not a place where smokerphobics are welcome. Moderation is a must. They often have a compulsive addiction to dropping in to post photos of the fake black lung or personal abuse because that's how they roll.

Meanwhile, our message is simple. Leave us alone, we've had enough, and we're not quitting. Instead we will hold October in remembrance of adults and children both here and abroad who have been murdered by smokerphobics, driven to their deaths by smoking bans, and bullied into suicide because of harmful public scaremongering campaigns.

Incidentally, what is Nike and Boots' employment policy now they are aboard the anti-smoker juggernaut? Will it include job discrimination against adult consumers who are being dispossessed of the right to work..

Posted by Beleaguered Consumer at 10:17